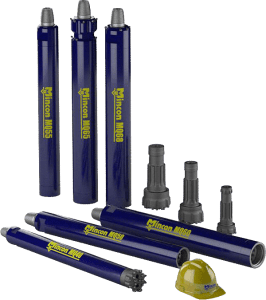 Mincon has launched their newest down the hole hammer (DTH) range and it was put through extensive testing over the past year. The range consists of high performance DTH hammers that run standard shanks while also removing the foot valve which from a design standpoint was the weakest part of any DTH bit.

Not only did the engineers remove the foot valve but they were able to optimize energy use by doing so, resulting in a performance boost over the other models. The lack of foot valve and the optimized air flow and efficient exhaust allows the MQ range to drill more efficiently when water is encountered in the bore hole.

See all of our Mincon products here