SMP design and manufacture equipment and tools for excavators, loaders and mini-machines between 1 and 70 tons. They offer the market’s widest assortment of excavating accessories, e.g. Swingotilt®, quick couplers, buckets and similar devices. Construction and design is suited primarily for the hard and tough Nordic environment.

FOR ALL TYPES OF EXCAVATORS BETWEEN 3 & 28 TONNES 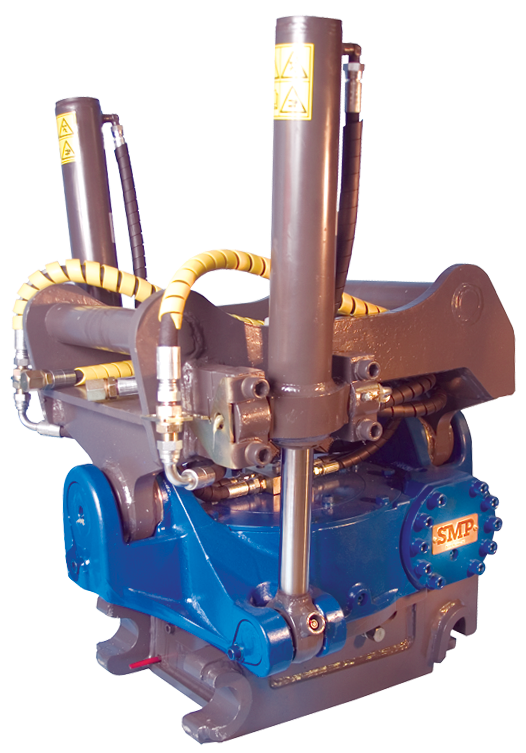 Swingotilt
The SMP Swingotilt tiltrotator acts like a ball joint between the excavator and the attached tool providing the operator with a new found flexibility on the job site. With a SMP Swingotilt one can reduce the equipment and man power required on the job site while increasing the actual productivity of the Excavator in action. This hydraulic tool for excavators and backhoe loaders is more the rule than the exception these days on most of the machines at workplaces and construction sites.

Simplifies work
Swingotilt functions like a ball joint between the excavator’s point and an attached tool, for example, a bucket, and makes it easy to pass obstacles, and simplifies moving heaps, planing, lifting etc. It means that the need to reposition and for manual assistance is radically reduced. It is only the driver’s imagination that limits what Swingotilt can be used for. In addition, safety is improved not only for the driver but for everyone around the excavator.

Advanced control system
Swingotilt is equipped with an advanced and integrated control system, which makes endless rotation and tilting of up to 40° in each direction possible. This is done by the driver from the cab using buttons integrated in the normal operating levers. The control system is adapted for 12/24 volts, and suitable for all machines on the market. As an extra option a proportional control system is available,where the tilt and rotation speed are controlled step-less via rollers integrated in the machine’s control levers. Integrated grab modules are available as an option on Swingotilt models ST6, ST9, ST15, ST22 and ST28. Swingotilt is supplied complete with hydraulic hoses, hydraulic connections, wiring and installation manual.